A few months ago I visited the Imperial Hotel in the Blue Mountains that laid claim to having the oldest flush toilet in Australia.

I was recently contacted by Hobart resident, Dr Neville Dawson, after stumbling across the aforementioned post. He let me know the fascinating details of a flush toilet situated in Hopkins Hall that potentially dates back to the mid-19th century and is still in working condition!

Neville was kind enough to pass on some photos and details on the historic building as well as the toilet itself:

“The stables and Hopkins Hall were built by convicts for Henry Hopkins, Hobart in 1835. Hopkins Hall was the first Congregational Church building in Australia. (much later, Uniting Church). Ironmonger  C Davis – is on my old toilet as you can see from photos sent.”

According to Alison Alexander from the University of Tasmania’s Companion to Tasmanian History, Charles Davis was a convict who was released from penal institution in 1847. He later established himself as a successful ironmonger and businessman, eventually boasting a warehouse, an importing business and four retail stores under his control.

Neville continues, “My toilet would not be the same age as my building (1835) as C Davis did not start his business until 1847. But being a Church they would have needed one as early as possible. It most probably was installed at the back, in part of the stables during the 1850’s.”

It could well be that Hopkins Hall holds the oldest working flush toilet in the Great South Land? Many thanks to Nevllle for getting in touch, and if anybody else is aware of any other historic old Australian restrooms then please feel free to drop a line in the comments below.

Hopkins Hall: built by convicts in 1835 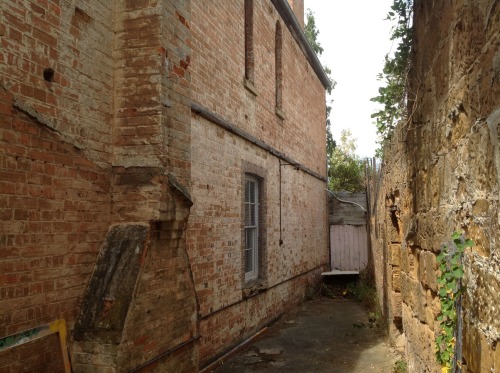 Hopkins Hall: built by convicts in 1835