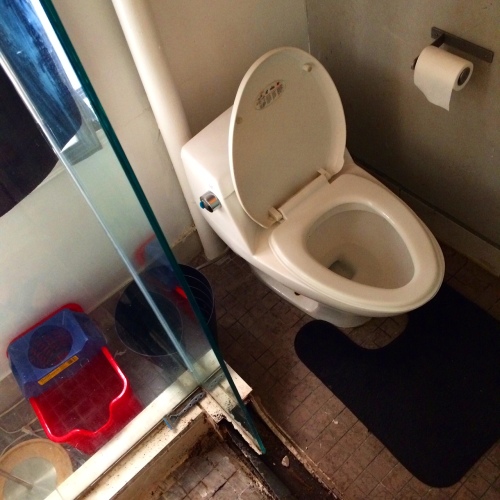 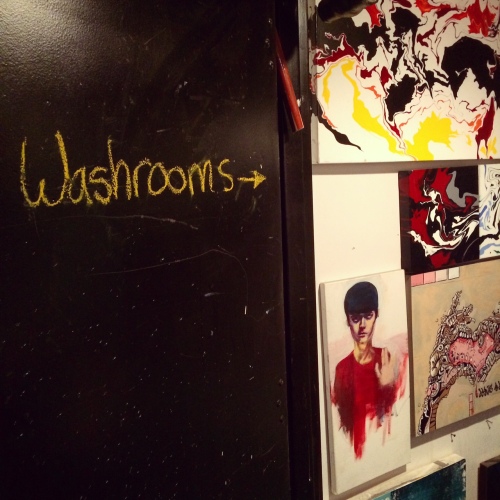 Big & little toilet at the 회현지하쇼핑센터 underground shopping complex in Seoul. I imagine this setup would be quite handy for those with young children learning to be toilet trained.

If there was an award for best new car smell in a washroom, the first prize would go to this one in the freshly-refurbished level 7 at Hudson’s Bay

I wonder if little bitch Shane took any calls? A classified ad on a toilet roll holder at Hudson’s Bay

I love finding a toilet when I least expect it. In this case, while browsing the shelves of Amoroso Music, I stumbled across this CD cover art by a British-born, New York-based composer called Fast Forward:

Same Same is an experimental release consisting of three tracks, ‘Simultaneous Music,’ ‘The Yin-Yang Merger,’ and ‘Feeding Frenzy,’ recorded live in NYC between 1990-1994. As explained at AllMusic.com:

Three wonderful ensemble compositions from the uplifting, lighthearted, and generous mind of Forward. Simultaneous Music is for six players who prepare their parts independently, never rehearse together, and are asked not to listen to each other for cues, etc. In this recording, the combination of melodic strings with percussion, voice, electronics, pedal steel, television sound, telephone books, dishes, turntables, stamping, etc., provides some rare moments. The Yin-Yang Merger is intended as “a meeting ground for acoustic and electronic music” and is scored for a battery of percussionists, voice, electronics, and Ben Neill’s “mutatrumpet.” Feeding Frenzy is a project about the “fabrication, composition, and consumption of food” — food and cooking hardware are used as instruments, and the score for the work is a set menu listing each of the courses. A delight for the unhurried.

It’s definitely interesting avant-garde music, to say the least! A great $10 spent for a very unique addition to my music collection.

The sketch of a man

Also have a look at Little Bitch Shane, a toilograph taken a few months later in the same set of cubicles

The entrance to a bathroom renovation store, iBath, late at night in Sydenham 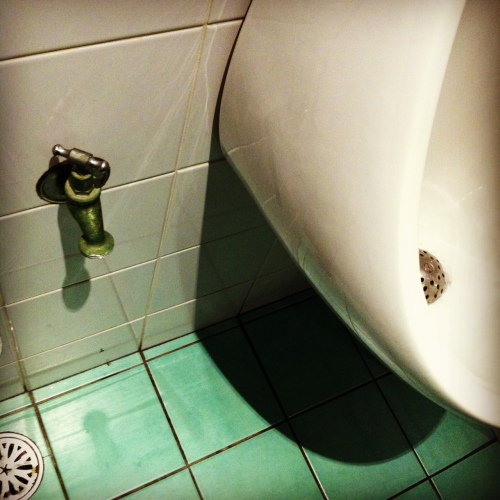 The bathroom at the Hayden Orpheum Cinema in Cremorne